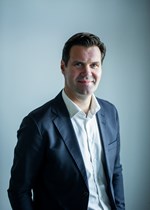 Sjur Malm
Chief Financial Officer
Sjur Malm (1979) was appointed as the CFO of Lerøy Seafood Group ASA 2012. He joined the company from a position as analyst for SEB Enskilda, where he had been employed since 2004. Since 2007, Malm has worked as an analyst within the Fishing and Industry sector for SEB Enskilda, and has several times been named best analyst in Norway within those sectors in which he has been involved. Sjur Malm holds a degree in Economics and Business Administration from the Norwegian School of Economics (NHH) and he has also completed a Graduate Programme in Economics and Business Administration at the same school. Sjur Malm owns 1,500 shares in Lerøy Seafood Group ASA.

Ivar Wulff (1974) was appointed COO Sales and Distribution of Lerøy Seafood Group ASA in 2019. He joined Hallvard Lerøy AS in 2007, since when he has mainly worked on laying the foundations for strengthening and establishing distribution channels and industrial market activities. Ivar Wulff graduated with an M.Sc. in Fisheries Science from the University of Tromsø. Wulff indirectly owns shares in Lerøy Seafood Group ASA as a shareholder in Austevoll Seafood ASA.