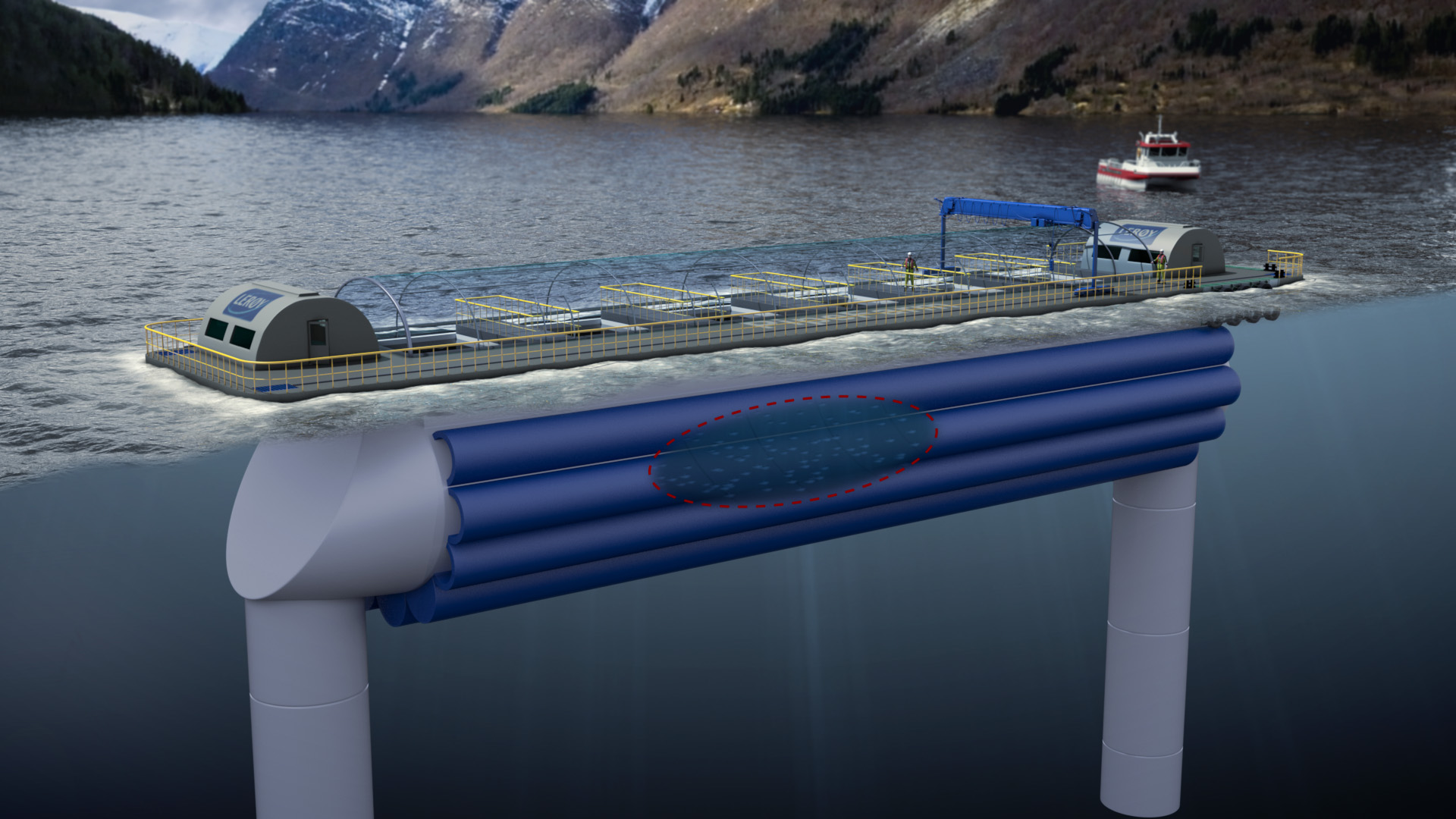 The following conditions apply for the permit:

Other conditions from the allocation were:

Requirements are also made on sharing of knowledge and experience:

Knowledge and experience gained from the use of the solutions shall be shared so that they benefit the entire aquaculture industry, ref. section 9, first paragraph of the Regulation relating to Allocation. Data and experience, in addition to evaluations of various measures implemented in accordance with this permit, shall be assembled and published in the form of an annual report on the company's website. The report shall simultaneously be submitted to the Directorate of Fisheries for publication.

Since 2010, Lerøy Seafood Group ASA (LSG) has collaborated with Preline Fishfarming System AS (Preline) regarding the development of a closed-containment floating facility for post-smolt production. Lerøy Seafood Group ASA currently owns 91% of the shares in Preline. LSG is also a partner in SFI CtrlAQUA (2015–2022), a centre that aims to develop and document a range of post-smolt concepts. A practically full-scale pilot of Preline's concept was launched to sea in the winter of 2015 at Sagen in Samnanger municipality, Hordaland county.

The tube cage facility is a semi-closed facility shaped like an oval pipe with a volume of 2,000 m3. Laminar flow is maintained through the pipe using water pumped up from sea depths where large numbers of salmon lice are not expected. The system is therefore of interest from a number of perspectives. The hypothesis for the project is that fish will have less exposure to disease and lice, and that the constant flow of water will increase fish welfare by keeping them well exercised. In addition, the design of the tube cage provides significant reductions in the risk of accidental release when compared with a commercial marine facility. During the second half of 2016, tests started on mud traps designed to collect feed residue and faeces from fish in the facility. In November 2016, Lerøy Vest AS was granted a provisional dispensation for release of up to 300,000 fish into the tube cage.

The purpose of the tube cage is to produce post-smolt – a larger and stronger smolt – that is released to sea in open cages at a weight of between 0.5 and 1 kg. The use of post-smolt provides shorter production time in open cages, and the hypothesis is that this will allow a reduction in disease and in the handling of fish in the sea. The risk of accidental release is therefore expected to fall and fish welfare to improve with the use of the tube cage.

At the end of 2016, a total of four generations had been released to the tube cage. These are listed in the table below.

* Not mentioned as the green permit was implemented on 8 January 2016.

Use of cleaner fish in the sea combined with post-smolt in the tube cage has, to date, had positive results. Each of the releases has been monitored and compared with a control group that has followed the normal cycle, whereby smolt are directly released to open facilities. Results from releases 2 and 3 and their control groups are discussed below. A report on release 4 will be published with the next annual report.

Release 2
Release 2 was released to a semi-closed facility at Sagen 2 on 28 October 2015. The fish were subsequently moved to locality 18 015 Hestabyneset in Langenuen, Tysnes on 15 March 2016. On the date they were moved, the fish from the tube cage had an average weight of 721 grams. These fish have now been harvested, with very positive results.

During the initial period, the fish were in a closed facility at locality 32 137 Sagen 2, where water was pumped in from depths of approx. 25 metres in order to avoid exposing the fish to lice or amoebic gill disease (AGD).

The fish were in the semi-closed facility at Sagen 2 for 18 weeks. During this period, 20 lice counts were carried out with 20 fish in each count. The lice counts were categorised into lice attached to the fish, moving lice and fully grown female lice. No lice observations were made on any of the counts for this release. The fish were treated with H2O2 in the well boat during transport between Sagen 2 and the Hestabyneset locality, as minor changes in gills had been observed prior to release. This fish received no other treatment for AGD after release. The fish were treated with Slice on 11 May 2016 as a preventive measure. By comparison, the control group has received five treatments and had one preventive treatment with Slice.

Release 3 was released to the tube cage on 30 April 2016 then moved to locality 11 543 Buholmen in Austevoll municipality on 31 August 2016. As indicated in Table 1, release 3 was moved from the tube cage at an average weight of 447 grams. Based on experience gained from release 1 (released in May 2015), it was expected that releases 3 and 4 at the end of August 2016 would have an average weight exceeding 500 grams. This growth was not achieved, but the fish were moved for the following reasons:

A number of improvements had to be made to the tube cage prior to the next release. These improvements included the installation of mud traps with purification filters.
Fish growth at Buholmen was expected to be better than in the tube cage, due to significantly higher water temperatures compared with the temperature in the tube cage, where water is pumped from colder, deeper water throughout the summer.
Lice were observed with release 3 on three of 18 counts, due to problems with a supply pipe. The number of lice was at its highest in the week before the fish were moved from Sagen 2. The observations were: 0.12 moving salmon lice, 0.02 salmon lice attached to fish and 0.05 fully grown female lice. Lice were not observed at the last lice count before the fish were moved. Release 3 was therefore not treated for lice in the tube cage.

Release 3 has not been treated in connection with lice, with the exception of the use of Slice in December 2016 in the open facility. The release was treated with fresh water for AGD in October 2016. By comparison, the control group was treated for lice using Thermolicer in December 2016, and with Slice in May 2016 as a preventive measure.

Norsk Oppdrettsservice AS (NOS) supplies farmed lumpfish to Sjøtroll Havbruk AS and Lerøy Vest AS. Confirmation of this from NOS is enclosed with the report. Lumpfish from NOS was added to the post-smolt from the tube cage when released to an open facility. In addition to lumpfish, wild-caught cleaner fish were utilised to combat lice in the open facility.

The ratio of lumpfish/cleaner fish in the different facilities is shown in table 2.

Some challenges have been identified with farming in the tube cage, and these are listed below.

Lerøy has gained broad operating experience during operation of the tube cage, ref. the list below.