Sander shines brightly on the ice

Photo: Christoffer Rukke
Sander Eitrem has recently taken the world of sport by storm. Next up are the European Speed Skating Championships, which are being held on home turf.

Normally, Sander is a quiet sort of person, who doesn’t make much of a fuss. He isn’t the loudest voice in the room, and he doesn’t feel the need to be the centre of attention. But on the ice, Sander is transformed. There, he shines. In November, he won Group B during the World Cup event in Stavanger. As well putting him on the top rung of the podium, this also secured promotion to Group A for the next World Cup event, leading to enormous levels of interest and media attention. Although that has been new to him, he has quickly grown comfortable with it.

“Naturally I’ve noticed that there’s a lot of interest, and that’s obviously good for the sport, but I’m a bit shocked at how much media space I’ve been given. It has been a bit overwhelming, but also really cool and something I appreciate”, he says modestly.

He feels greater pressure with the attention he’s received, particularly in the run-up to the European championships.

“I have high expectations for the Europeans. I would like to get on the podium; I won’t hide that. But that requires all of my races to go well, and that isn’t easy.” 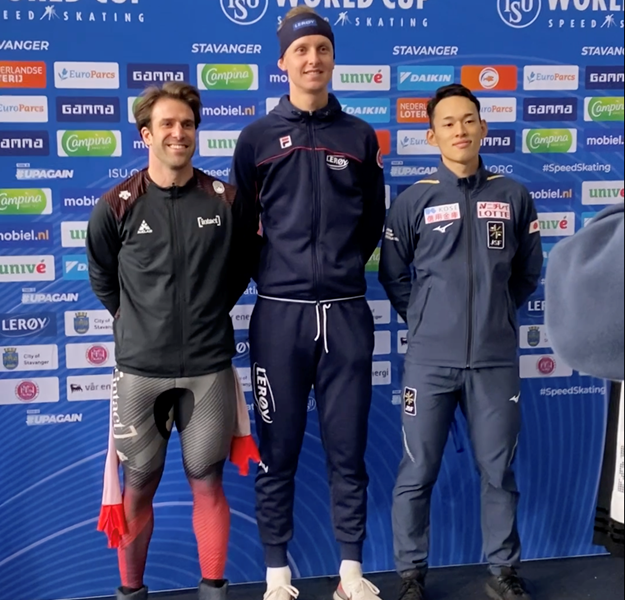 Sander won Group B during the World Cup event in Stavanger, this also secured promotion to Group A for the next World Cup event, leading to enormous levels of interest and media attention.

This year, the European championships are being held in the “Viking Ship” in Hamar. That is where he has done most of his training – thousands of laps on the ice and hours of work, all to get where he is today. Blood, sweat and tears.

“I feel that the arena has helped to build me into the person I am today”, he says.

At the age of 15, he moved by himself from Toten to Hamar to go to the Norwegian College of Elite Sport, specialising in skating. During his three years at the school, he developed a huge amount. As well as the training and discipline required, it was the first time he had to stand on his own two feet.

“At a young age, I decided that I wanted to be best. Moving to Hamar was something I did to progress. I’ve never seen this as a hobby – it’s my passion.”

Competing in his home European championships will be a dream come true. Not only does he know the rink inside out, there is also something special about the Viking Ship. It is as if he gets an energy boost when he competes there. That will stand him in good stead, because he knows his teammates will up their game for the European championships.

“Of course I want to be best the whole time, but that isn’t always easy”, says Sander. Ice skating has been Sander's passion since he was 8 years old. Photo: CHRISTOFFER RUKKE

The art of keeping a cool head

Many factors can influence the outcome of a race. For example, as a top athlete, Sander needs to have a good diet.

“Eating the right food is really important. If you don’t eat right, you have no chance of performing well. I eat plenty of carbohydrates, fish, unprocessed meat and vegetables”, he says.

Illness is another factor, so Sander works hard to avoid getting infected, which means taking all possible precautions. If he manages to stay healthy, a gold medal could be within reach, but it is dangerous to make predictions. Everyone on the national team is highly competitive, which means they push each other on. And there is one person in particular whom Sander wants to get the better of. Hallgeir Engebråten is a teammate, role model and friend, but also the person he most wants to beat.

“I have looked up to him since I got into the Norwegian College of Elite Sport. He took the same route, so I feel I’m following in his footsteps. The fact that I am now at his level obviously means that I want to beat him.”

However, Sander thinks that mental strength is most important of all. If he isn’t mentally in the right space, it doesn’t matter how strong he is.

“With five laps to go, when you start to feel the lactic acid, you have no chance if your head isn’t in the right place. Then the lactic acid will get you and you won’t manage to move your legs, so being switched on is crucial. It is so important”, he says.

Although he would never swap his current life, he still feels that he has had to sacrifice a lot to get to where he is. He misses his family, and that is the biggest sacrifice. He has lost out on a lot of family time, and with his ambition to remain a world-class athlete for as long as he can, that is unlikely to change in the immediate future. During the season, he is away for months on end, and he spends large parts of the summer at training camps with his fellow athletes, so there are not many weeks that he can spend at home with his family over the course of the year.

“It does make me a bit sad that I can’t spend all that much time with my family, but equally I’m all in for this sport, so that makes it worth it, in a way. Now I have shown that I can mix it with the world’s best, so obviously I’m hoping to stay at this level for at least the next ten years.” 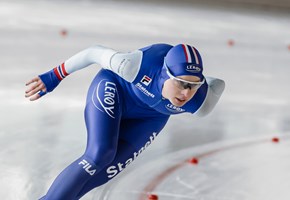 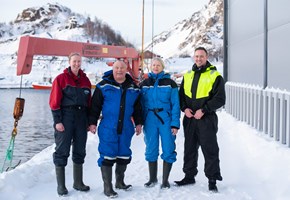 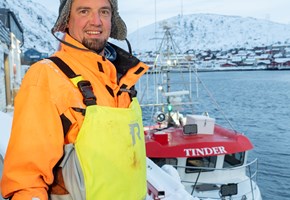 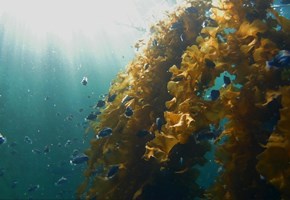