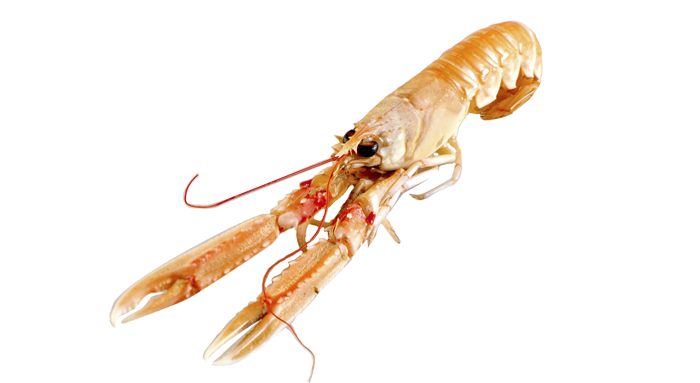 Latin: Nephrops norvegicus
Norway lobster goes by several other names, such as Dublin Bay prawn, langoustine or scampi. It is perfect for cooking in numerous ways and is a welcome ingredient in dishes with other seafood.

Norway lobster is especially rich in:

Living at depths of 20-800m, usually on soft seabed of sandy mud or clay, the Norway lobster digs a hole in the sediment to conceal itself. The kidney-shaped eyes, which give it its Latin name Nephrops norvegicus, are extremely sensitive to light. Therefore it spends a great deal of time in the hole and only emerges at night to hunt food, or in the daytime at great depths where there is little light.

The Norway lobster is omnivorous and eats other crustaceans, chaetopods, mollusks and carrion. The adult Norway lobsters are territorial and can live up to 15 years of age.

Norway lobster is fished all year round along the Norwegian coast north to the Lofoten
Islands, in the North Sea and in the strait of Skagerrak. The largest share of the catch comes
from the strait of Skagerrak. The fishing gear used is mainly pots, in addition to some
being taken as by-catch in shrimp trawls. Pot fishing for Norway lobster is popular among
recreational fishers as well.

The International Council for the Exploration of the Sea (ICES) monitors the Norway
lobster stocks in the Norwegian Trough and in the Skagerrak and Kattegat straits, where
researchers have concluded that stocks are strong and sustainably managed.

The Norwegian seafood industry is subject to stringent requirements in order to ensure that
the seafood is safe for consumers. Checks are done throughout the entire food chain to
ensure the safety and quality of the fish, with the authorities laying down health and safety
regulations that are supervised by the Norwegian Food Safety Authority, the Norwegian
National Institute of Nutrition and Seafood Research (NIFES), the Norwegian Directorate of
Fisheries and the Norwegian Ministry of Trade, Industry and Fisheries.

Norway lobster must be cooked immediately after being killed to avoid deterioration
in quality.

Norway lobster has a sweet, mild taste and a firm, white flesh. It can be grilled, steamed or pan-fried, and is ideal mixed with other shellfish, such as shrimps and king crab, in dishes like casseroles and soups. Serve grilled with scallops as a warm salad, with clams and spaghetti, or roast with garlic, lemon and fresh herbs.